From Runaway to Rescuer - the Story of Santosh Kumar 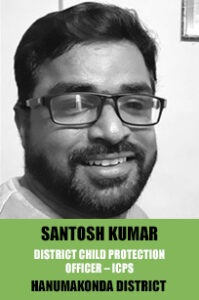 Santosh Kumar, the District Child Protection Officer – ICPS, Hanumakonda District is a living story of how far endeavours towards youth enablement and support can go. His is a compelling story of a rebel, a leader and a self-determined individual with a passion for cricket who as a child saw himself on the streets of India as a runaway. He mentions that 75% of children run away from home due to fear of parents. A fear of his father pushed him to run away from his home, onto the streets and into a life of begging and substance abuse. Through a series of events a train accident saw him lose his arm and a leg making him a cripple. An outreach program from Don Bosco found him and tried putting him into a rehabilitation program. He resisted this extension for help but the desire to own a uniform jacket put him in school. He saw encouragement from the fathers of Don Bosco of the Navajeevan Home and this made all the difference. They were patient with him and Fr. Koshy, aka ‘Papa’, showed him the difference between what was good and what was bad.

He gained a life of dignity.
A new identity transformed ‘Ghouse’ the runaway, street kid into Santosh the committed social worker. He gained a sense of worth and the confidence to speak his mind, chart his own course and reach out to others.

He gained a future.
Santosh gained a chance to get back from the margins, to have the security of food, shelter, healthcare and an advanced education enabling him to make a living with dignity. He gained a family that cares within the Navajeevan family network. He won friends that support him and emotional stability that enabled him to go out and create his own family.

He gained the capacity to give.
The Navajeevan environment encouraged support, provided training and opportunities to hone leadership. They were exposed to child rights ideologies that shaped an understanding of the issue and were instilled with the Don Bosco spirit which inspires one to reach out.

Santosh pointed out that in his work today the stark factor that while street children have decreased in number, missing children have increased and begs the question as to where these children are.

Santosh ends his speech by saying that ‘changing one life can change the life of many’. He urges us to develop child friendly societies, encourages parent-training and asks of us to build a better life for tomorrow. Today, apart from his role as a social worker, Santosh coaches a cricket group with his own 2 sons.