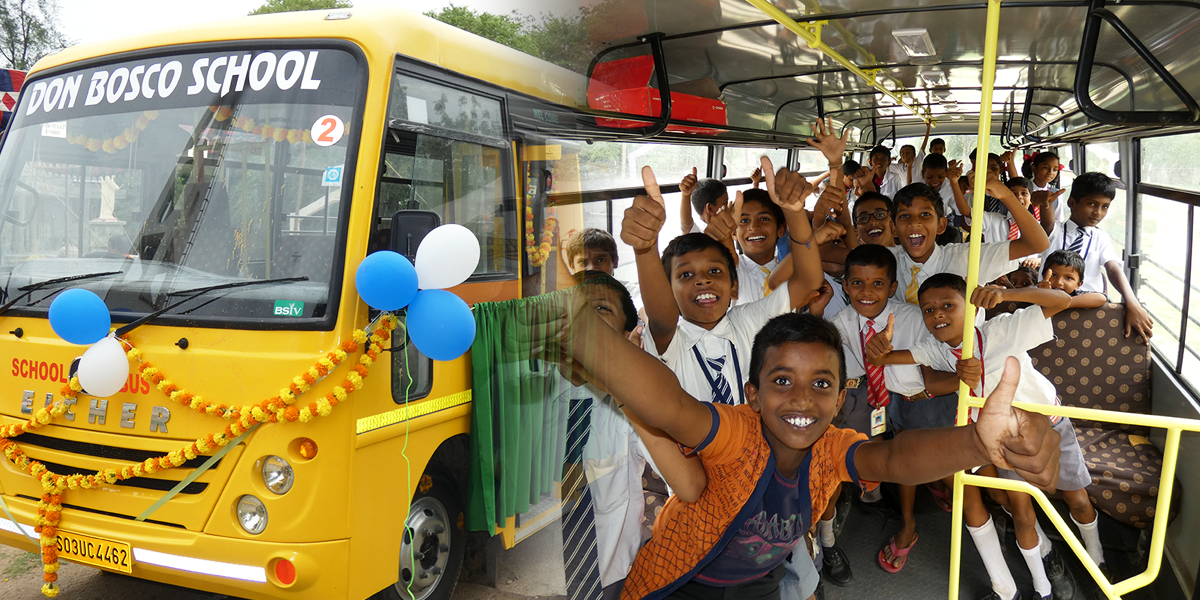 The target Don Bosco Schools cater to the educational needs of underprivileged children residing in rural areas of Telangana and Andhra Pradesh. These schools have been instrumental in providing quality education to the otherwise underserved areas of the two states. However, these villages lack proper public transport system which makes commuting to the schools difficult. Majority of the children who were unable to avail the existing school bus services had to tread or cycle long distances to reach the schools. The existing bus services in these schools had huge demand and thus the services were provided on priority basis to only small children and adolescent girls.

Due to safety reasons and high cost of private transport, parents were considering not sending their children to schools; and pull out their children, who were existing students of the schools. The long commute to schools was further worsened by rains, inundated roads and extreme weathers. This often resulted in children missing morning classes and/or absenteeism. Consequentially, the educational performance of children was negatively affected. The absence of a safe transportation system for children disincentivised parents from enrolling their children in the formal education system.

These circumstances doubly affected the girls in the region because they were rendered vulnerable walking through empty roads. Catcalling, teasing and harassment by locals had been reported frequently by the girls. Their parents were apprehensive of sending their adolescent daughters to school due to threat perceptions. The girls in turn were growing disillusioned with schooling due to the constant harassment they faced. The lack of a safe transport facility had huge repercussions on the education of some of the most backward communities of AP and Telangana.

Four Don Bosco Schools in the states of Telangana and Andhra Pradesh were provided with five school buses, for the safe and secure transportation of its children. The project was a collaboration between General Insurance Corporation of India (GIC) and BOSCONET, New Delhi. The buses addressed the ‘safe travel’ needs of around 1000 children especially girls, spread across 200 villages. The Memorandum of Understanding (MoU) between GIC and BOSCONET was signed on 15th March 2019, following which the 5 buses were purchased and delivered to the four schools. This was celebrated with a launch programme on 5th July 2019. The schools which received the buses are the following: Don Bosco School, Ravapulem; Don Bosco E.M School, Mariapuram; Don Bosco, Wyra and Don Bosco Punganur.