Mounesh’s journey from a child labourer to a Police Constable 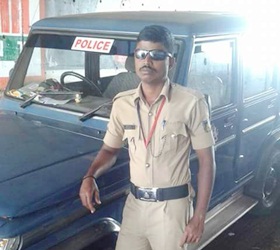 Abijit Sarkar, a young man of 26 years of age completed his three months training in the hospitality sector with Don Bosco Tech Monsada in 2012 and took up job as a fresher with Manipal County, Bangalore. His is a story of making a dream come true, of creating hope for the hopeless, of conquering poverty, of providing a home, of building up a family, and becoming a contributing citizen of the land.

Hailing from an interior village called Ranihati, laying 95 km north of Kolkata, all that faced him was utter poverty. His father struggled hard to provide for the family with the meagre earning he got, initially as a day labourer and cultivating in farms that he did not own but only to earn some money through seasonal cultivation. He had nothing much to offer to his two sons except basic schooling.

While studying for 2nd year graduation Abijit took the decision to get trained in Hospitality sector which Don Bosco Tech (DB Tech) had just started at Monsada, some 3 km away from his house. “The decision to discontinue my study and get a job through DB Tech placement department was the best thing that could have happened to me. If not, I would have turned out to be someone who would make a living even doing bad things”, recalled Abhijit while visiting his life-changing alma mater, DB Tech in Monsada.