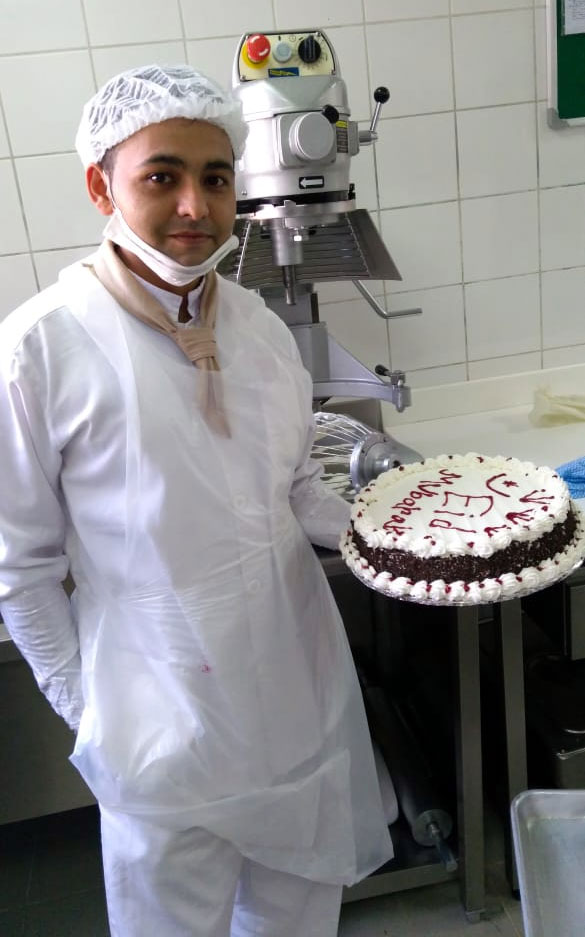 Abijit Sarkar, a young man of 26 years of age completed his three months training in the hospitality sector with Don Bosco Tech Monsada in 2012 and took up job as a fresher with Manipal County, Bangalore. His is a story of making a dream come true, of creating hope for the hopeless, of conquering poverty, of providing a home, of building up a family, and becoming a contributing citizen of the land.

Hailing from an interior village called Ranihati, laying 95 km north of Kolkata, all that faced him was utter poverty. His father struggled hard to provide for the family with the meagre earning he got, initially as a day labourer and cultivating in farms that he did not own but only to earn some money through seasonal cultivation. He had nothing much to offer to his two sons except basic schooling.

While studying for 2nd year graduation Abijit took the decision to get trained in Hospitality sector which Don Bosco Tech (DB Tech) had just started at Monsada, some 3 km away from his house. “The decision to discontinue my study and get a job through DB Tech placement department was the best thing that could have happened to me. If not, I would have turned out to be someone who would make a living even doing bad things”, recalled Abhijit while visiting his life-changing alma mater, DB Tech in Monsada.

Giving reason for taking up hospitality sector he said, “I knew I have no future in my village. I will not be able to get into a government job paying a huge amount. If I stay in the village, I would become just like my batch-mates – searching for a job and loafing around. This made me quit my village and look for a career elsewhere and I do not regret that decision.”

Six years of hard work has earned for Abhijit certain respectability in his village where many young men of his age are still at large looking for a decent living. “More than the skill I learnt at Don Bosco, it was the disciplined way of life I received there that kept me back in my job despite the mental battle to return home” shared Abhijit as he spoke about the struggle he had to stay on the job.

“You can see the fruit of what Don Bosco has done to our family” said Mr. Amar Sarkar, the father of Abhijit, pointing to their new house under construction. “If it was not for Don Bosco who gave job to my son, I would never have seen this house in my life. I make a profit of about Rs.300/- a day, selling puchka in the evening hours in the market.” Recalling the journey of his life he said, “Life has been too cruel to me. But no use of complaining about all those bad days. My son now is helping us to live like good human beings. That is enough.”

Mrs. Sheela Sarkar, Abhijit’s step-mother (his mother died of kidney failure when he was in cl. 8) contributes her mite by helping her husband to prepare puchka at home. “We spent about Rs.250/- a day to prepare what is needed to sell in the market. With our son working our living has improved but that is not the important thing. The education he got at Don Bosco and his hard work has slowly matured him into an honest man. While many of his friends are jobless in the village we are proud of our son who earned certain respectability in the village. He is the role model for my younger son”, shared Mrs. Sheela, trying to hide her tears of joy.

“I had a dream … get a job, buy a bike, build a home. I never thought I would reach this state. I plan to invest Rs. 6 lakhs on the house I am building now and later complete it” shared Abhijit as he spoke of his next plan to take up as a fresher in a Cruise ship for which he has already taken the needed certification.

Don Bosco the dreamer continues to dream through young people like Abhijit.