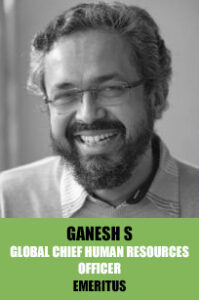 The next speaker to take the stage was Ganesh S, Global Chief Human Resources Officer, Emeritus – an EdTech Start-up currently present in 25 countries. The organisations mission is to make high quality education accessible and affordable to people at all levels. They have partnered with 65 reputable Ivy League universities, take their courses, make them online and sell it at a fraction of the price. They run 404 courses globally with over 5 languages that have made this program accessible to students across the globe.

Ganesh brings to the focus statistics, mentioning how the education of 320 million students were affected by school closures during Covid 19 in India alone. He points out that only 23.8% of urban households have access to the internet and rural households and the tribal belt stood at 15%. He adds that 16% of women have access to mobile phones as compared to 36% of men and that according to the World Bank, a child who’s mother can read has a 50% chance of survival past the age of 5. He stressed that women’s education was a large part of their mission as well.

The core mission that Emeritus runs is accessibility and affordability of education. Some of the activities towards this mission are entailed below:

Activities to bridge the digital divide in aboriginal or tribal areas in south and central India are underway. Their first attempt was an initiative towards their own office housekeeping staff, bringing devices (i.e smart phones and refurbished laptops) to the families. This then spread across boundaries to many states in the country.

Tribal Libraries – an initiative in the central and south Indian belt now has 38 libraries in tribal and aboriginal areas of Kerala and Karnataka being provided with laptops and study materials. There are an estimated 15000 beneficiaries who have access to and benefitted from these laptops creating huge impact.

Vahani Scholarships – is an initiative that identifies households whose annual income is less than 1 lac p.a. Every year 51 high scoring students entering into graduation are picked trained and provided mentorship in an attempt to create entrepreneurs. These children are given Ivy League courses and some have gone on to create education institutes to impact further children like them. Mentors from Silicon Valley have taken on mentorship programs with these students.

Restore Her Voice – This is the pet initiative of the organisation and works with about 10 women in Afghanistan who’ve moved to the US. They receive access to study material and mentors (some of whom are Ivy League professors) to get the education they and their children need. In Sindhudurg, India the tribal belt has a large group of young girls who have dropped off the education highway during the Covid pandemic. These girls are personally given laptops to pick up where they left off.

Emeritus Ukraine Fund – Institutions in Poland have joined hands with the Emeritus to help support people who’ve been affected in Ukraine. 2.5 crores have been set aside for education scholarships for students there. They support institutions in Kerala who have been aiding Ukraine returnees return to their education. They also work with at least 3 institutions in Poland and Kiev for orphan adoptions and educational empowerment for students in the Ukraine. About 12000 people have been impacted by these initiatives.